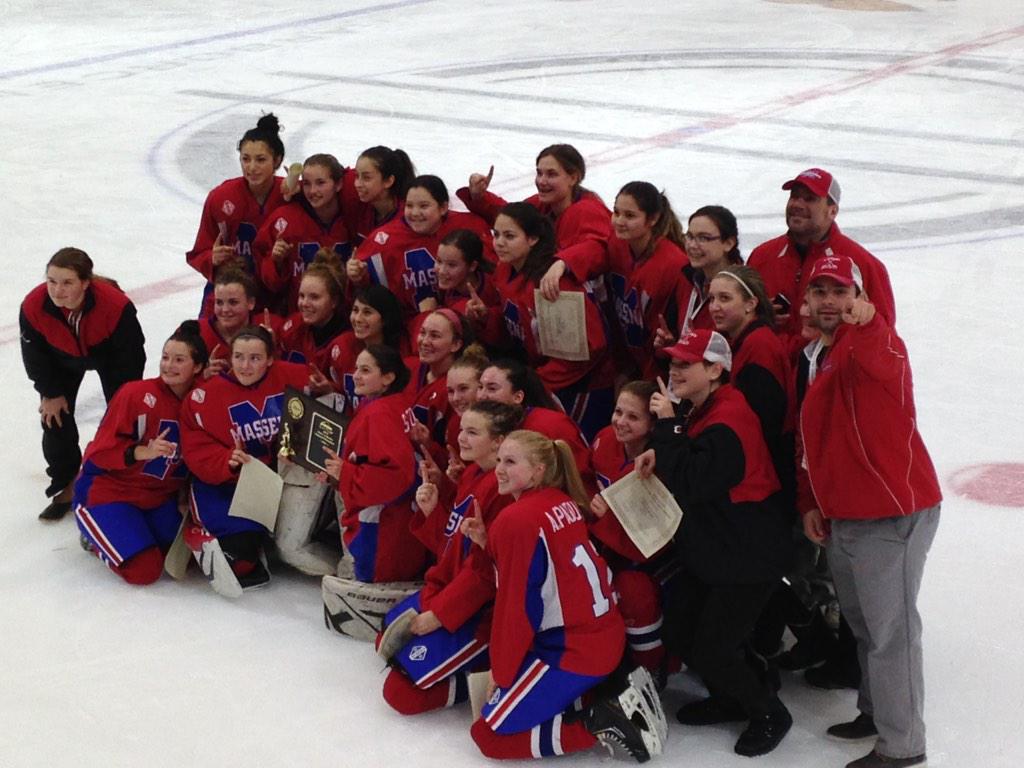 BUFFALO - The first time proved to be the charm for the Massena Central girls hockey team.

“It just feels awesome. It’s absolutely amazing,” said coach Jennifer Gray after the Lady Raiders (14-8) blanked Section 6 champion Kenmore 3-0 in their first appearance in the championship game of the NYSPHSAA Regional tournament on Saturday at the HarborCenter rink located near the downtown waterfront in Buffalo.

“Our theme since the start of the year has been, ‘Leave a Legacy’. We started it today and now we don’t want it to stop here,” she added. “Everything that’s happened this weekend and all year has been the result of a lot of hard work.”

After closing out the regular season with a second hard-fought loss to perennial Section 10 power and defending state co-champion Potsdam Central, the Lady Raiders put together an impressive four-game win streak in the playoffs that included breakthrough wins in the sectional final and the two victories in Buffalo this weekend, leading to their inaugural state tournament win.

“The boys on the hockey team in Massena always brag about winning the state championship last year and now we have one,” noted senior captain Ellen Greene, a four-year blueline standout. “Every year, our team has gotten stronger and stronger and I had a good feeling about this year right from the start. This is just a huge step for our program.”

While Greene and the other seniors on the team capably filled their leadership roles throughout the season and Saturday’s win, a pair of sophomores emerged as the individual stars as Amber Thomas connected for the first two goals and classmate Kyrsten Stone calmly turned aside the 24 shots she faced to earn her second straight championshiup game shutout.

“It was just a total team effort,” noted Stone, who twice picked herself off the ice in the second period after being plowed into the back of the net by Kenmore forwards looking to pounce on rebounds.

“We all worked hard as a team and believed in each other all year. Once we beat Potsdam in the playoffs, we knew we had a chance of doing well this weekend.”

Thomas and the Lady Raiders wasted little time setting the tone for their win over the Devil Dogs (10-3-3), who were also making their first appearance in the state final after having captured a fourth straight sectional title. On the first shift of the game, junior Molly O’Connell outworked a Kenmore player for possession of the puck along the right boards just inside the blueline in the offensive zone. O’Connell quickly centered a pass to Thomas left alone at the top of the slot and she made no mistake pumping a rising shot inside the left post just 1:28 into the game.

“Before the game, we talked about coming out and trying to sieze the opportunity right away. We wanted to jump on them early and never let up,” said Gray.

The Lady Raiders went on to control the first period but ran into penalty trouble in the second where Stone rose to the occasion stopping the 10 shots sent her way by a revitalized Kenmore squad.

“We had the three power plays in a row in the second period and we threw everything we had at them but we weren’t able to get one in,” said Kenmore coach Jeff Orlowski.

“Massena played a strong, physical game and they’re a good team. We just weren’t able to keep playing at the same level we played in the second period for the whole game,” he added.

After weathering the Devil Dogs’ storm in the second period, the Lady Raiders went back to work in the third on finishing the job they had started. They resumed their tenacious forecheck and tightchecking defensive zone coverage and were able to control play at both ends of the ice.

Then, with just 3:01 left in regulation, senior Bailey Dillabough created a turnover in the left corner of the offensive zone and got the puck to Thomas at the left of the goal. She quickly wristed a shot toward net that eluded keeper Lauren Pray (21 saves) and slowly fluttered across the goal line for her second tally of the game. KC Herne, another member of the strong sophomore core in the Massena lineup, sealed the win when she raced the puck across the center redline along the left wing then shot it into an empty net from outside the blueline with 56 seconds left.

“We couldn’t be prouder of the girls and our athletic program,” said Massena Athletic Director Tim Hayes, who was on hand watching the Lady Raiders put the finishing touches on their banner 2014-15 season.

“The players, the coaches, the parents, they all did a great job to get to this point.”

“It really takes a community effort for something like this to happen,” he concluded.